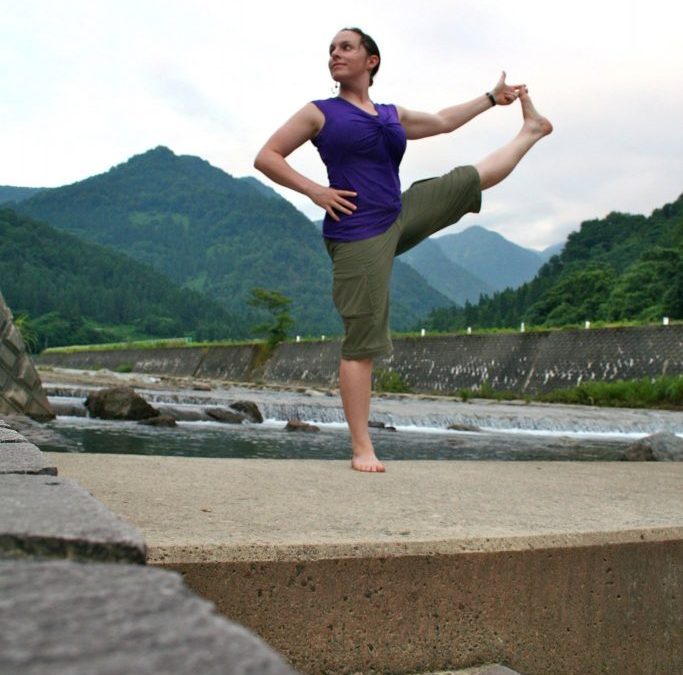 Back in 2011 (also known as pre-Instagram era), I took my first yoga self selfie. This was a fun, freeing, and transformational moment in my life. Unknowingly to me at the time, this was one moment in what would become a long chain of experiences of using yoga to overcome fear. 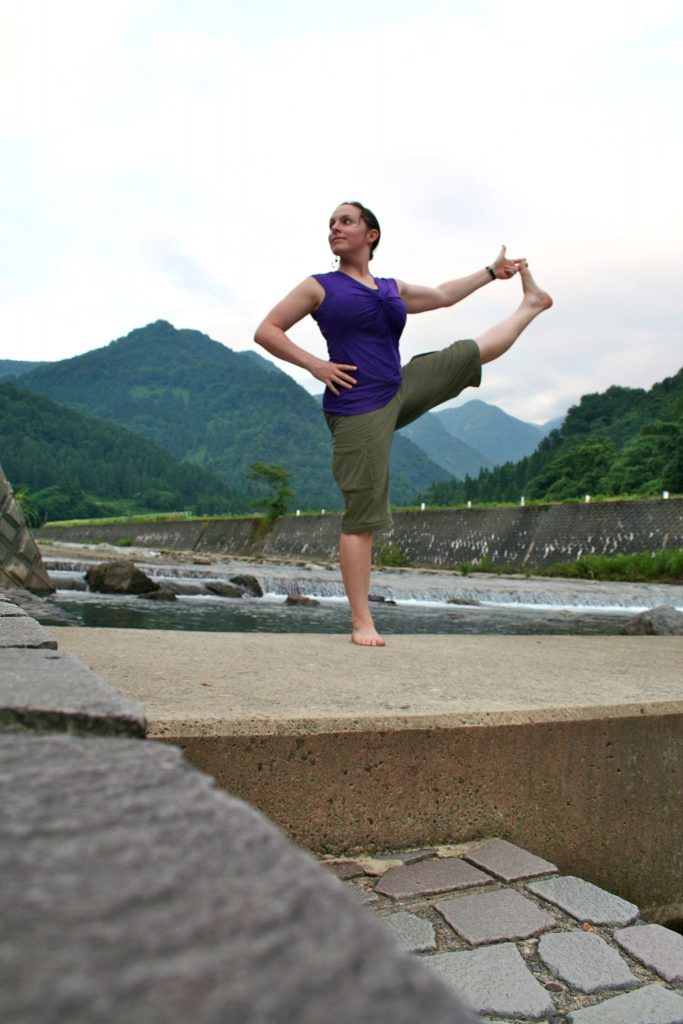 I snapped this photo on a self-timer with a digital camera (not a phone) during my first summer working in rural Japan in 2011. After a few weeks of staying on campus, I ventured out alone to explore the area on my bike. I didn’t have access to a car, so I turned my handlebars with a shopping basket attached to them towards the mountains to see what I could find. This is Japanese Snow Country (Yuki Guni) in the winter with meters of snow competing to be as tall as the Japanese Alps mountain range in the summer. 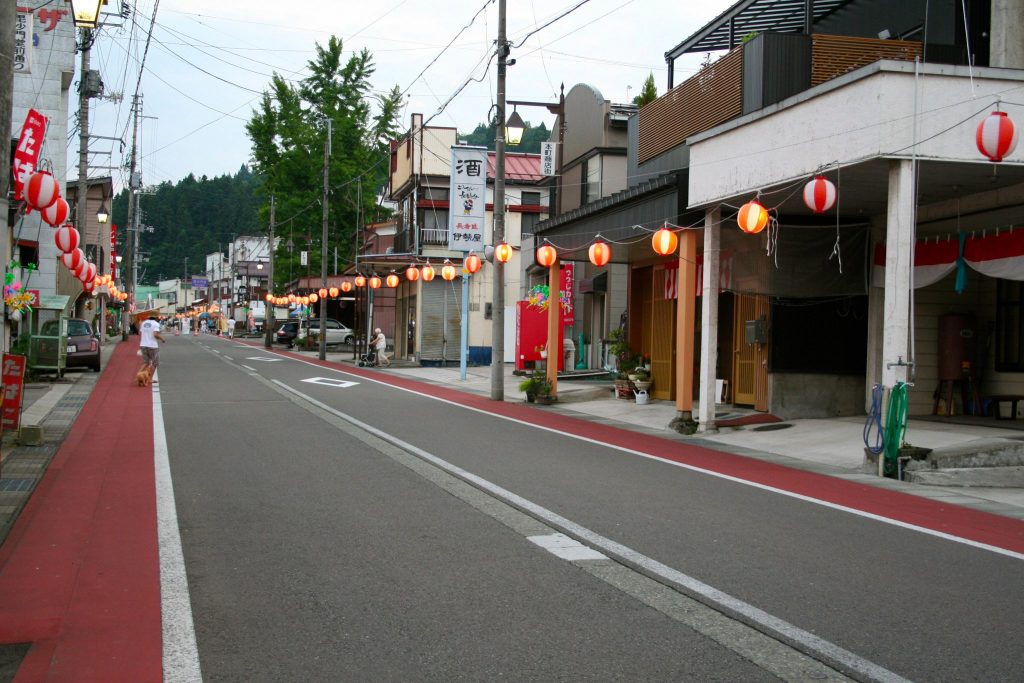 When I first arrived at the university in July 2011, I was afraid of everything. I wasn’t in a city, I was in rural Japan, thousands of miles away from everyone and everything I knew. I was disoriented and didn’t know how to be or who to be to fit in. Japanese culture highly values politeness and I was constantly wondering: “Did I say the right thing? Am I being rude?” When I wasn’t at an orientation or curriculum meeting, I was crying alone in my on-campus apartment. I willed my uncontrollable tears to stop when it was time to go back to work and as soon as I came home and closed the door, the tears started again. I didn’t tell anyone at the time. I didn’t want my new colleagues to think I was emotionally unstable and unfit for the job. For years leading up to this moment, I had wished, hoped, applied for, and finally gotten this opportunity to teach abroad. My emotional response rocked and shocked me and I couldn’t make sense of it. I remember thinking: “You wanted this so badly, so now that you have it, why are you crying all the time?” A few weeks later I realized that I had experienced culture shock; a totally normal phenomenon when traveling and relocating to another country where literally everything, from the language, food, social rules, and environment, is different.

This wasn’t my first time experiencing culture shock. Ten years earlier I studied abroad in Mexico and upon arriving at my host mother’s house, I cried uncontrollably for the first two days. My host mother was really strict with me. She told me in no uncertain terms that I could only Spanish in her home. I agreed to these terms, thinking to myself: “Yeah lady, that’s why I’m here… why are you lecturing me?” Eventually, she softened and as our relationship developed and so did my Spanish. So imagine how I felt a few weeks later when she started speaking in English to me to practice her language skills too. I remember thinking: “Is this some kind of trap?” and let her speak to me in English while I answered back in Spanish.

Fast forward ten years later to this moment in 2011. I remember being disoriented by new living and working environments, new colleagues, new social circles, cultural and language barriers, new everything. I had left everyone and everything familiar back home. I missed my dog and kitties. And did you know that Japan has three writing systems? I didn’t know any of them. This meant I couldn’t do basic things like read food labels or say anything more than “thank you” to sales clerks. 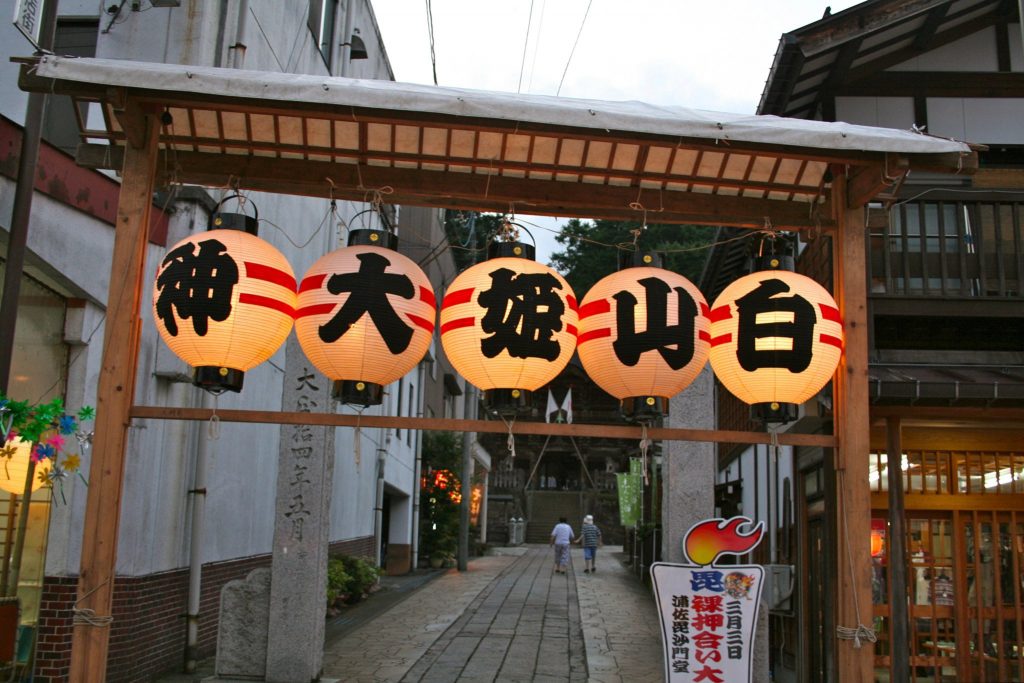 One of the funniest memories (which was terrifying at the time) was when my new colleagues gifted me special bottled water on my doorstep. I opened my door and there was a one-liter water bottle that said: “Royal Milk Tea”, but clearly it was water. I was dumbfounded. It turns out, my colleagues left me a “ding dong door drop” gift of the most delicious and locally-prized spring water from our now beloved dragon water shrine. But at the time, I thought: “What the hell is this bottle doing on my doorstep?” When I found out what it was, then I was afraid to drink it for fear it would make me sick. My colleagues said they had been drinking it for years, so I waited two days, and when they still appeared healthy and well, I finally allowed myself a sip. It was as divine as they said it would be!

A few weeks later, my neuroses returned when my course coordinator gifted me a bouquet of summer lilies. His neighbor had given him these flowers which were intended as gift for his wife who was out of town, so he gifted them to me instead. I was terrified again, thinking: “My course coordinator’s wife will hate me, I don’t even know her!” When I told my course coordinator this, he laughed and so did my other colleagues. One of them asked: “Have you not met his wife? She’s the sweetest person!” I have since met her and she is one of the kindest people I’ve ever met.

Because I lived on campus at this quaint little university, I was afraid that students would knock on my on-campus door and beg for better grades. They didn’t do it. Not ever. Not once.

To use my mother’s phrase, I was a walking nerve end that summer.

Do you see a pattern here? Receive a gift, anticipate the worst-case-scenario, everything works out.

The Yoga of Fear and Bravery

As is usually the case, none of my worst fears came true. I was a pretty anxious person back then and still am in some ways today. Yoga has made me more aware of my anxious tendencies and given me tools like awareness and breathing to not let my fearing voice make certain conclusions.

This photo was from my first weekend in Minamiuonuma-shi. My aunt prophetically told me before I left: “While you’re there, you’ll find your own time and have adventures on your own.” She was so right. This photo is proof. I remember the streak of bravery I felt, the same one that told me to get on my bike and go explore. I listened to the call of the mountains and I rode my bike up the Mizunashi Gorge to introduce myself. I found the river gorge lined with green lush mountains and thought: “I should take some yoga photos here!” This is a place of peace for me and seeing these mountains every day reminded me:

We are so much bigger than our fear wants us to be.

To me this moment represents vastness, freedom, strength, and flow. By listening in to myself and to nature and going with the flow that day, I learned one of many lessons to trust myself. By trusting my intuition, an abundance of positive and transformative moments were put into motion from that moment with me standing tall and holding my big toe in uttitha hasta padagustasana (extended hand to big toe pose).

Managing fear has been a lifelong skill for me. And while my ability to identify it has strengthened so that it doesn’t have such a paralyzing grip on me anymore, it still exists in most of our limbic lizard brains to keep us safe from the unknown. After I snapped this photo, I rode my bike into town for a festival and ran into a festival of men in white wrap shorts asking me if I’d like to be hoisted up (I said yes!), met my colleagues at a festival in this provincial sleepy town, and enjoyed the unique quaintness of small-town summer in Japanese vibe. 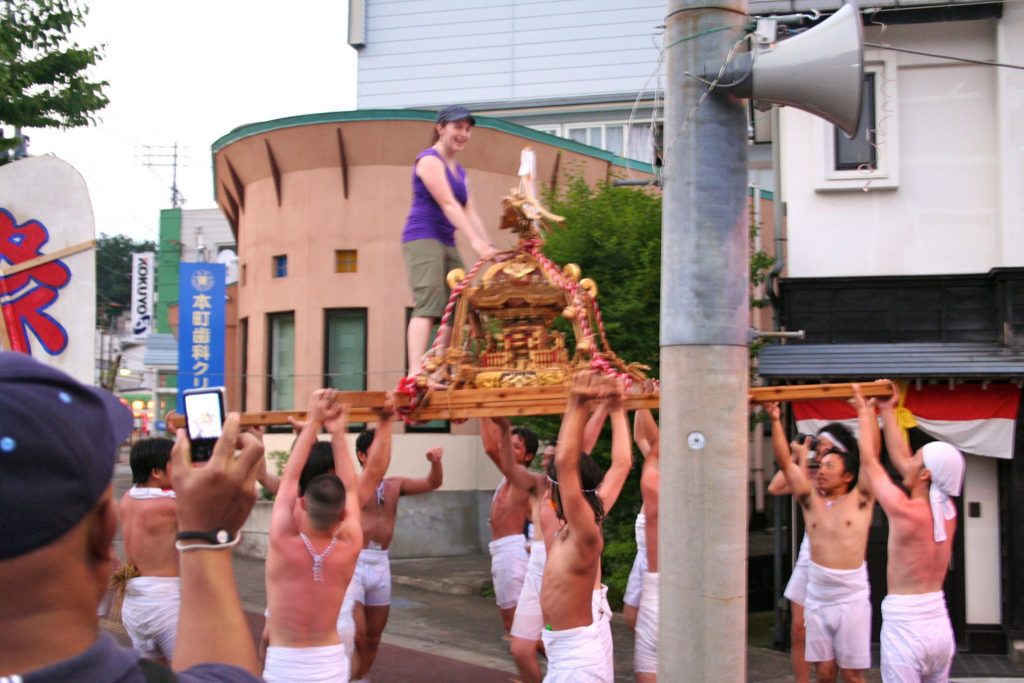 It was delightful. Then I remember refusing an offer for a ride home, choosing to bike back home like the independent woman that I am. After this exalted day, fear showed up in my brain again while I tried to trust my intuitive navigation and find my way home in the vast dark sky among a few homes and rice fields. I was so afraid I would lose my way and get lost. And once again, my worst fear didn’t come true. I found my way home (it is a small town after all and thankfully the university is right in the center between the town and the mountains).

As Liz Gilbert says, we can’t banish fear. We have to let her stay in the car, like an uninvited road trip guest. Fear is trying to keep us safe, so it gets to come along for the ride. But she doesn’t get to pick the route or the music. We will listen to her, but we won’t let her drive. If we do, she won’t let us do anything outside of our comfort zone. This metaphor is brilliantly illustrated in this comic. 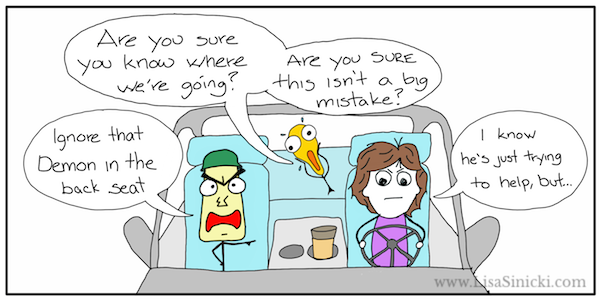 Much love to you beautiful and brave people. May you stand steady in the nuanced space between bravery and fear. This is one way we practice yoga off the mat.
Breathe and believe, beauties.
XO,
Rachel

This website uses cookies to improve your experience while you navigate through the website. Out of these cookies, the cookies that are categorized as necessary are stored on your browser as they are essential for the working of basic functionalities of the website. We also use third-party cookies that help us analyze and understand how you use this website. These cookies will be stored in your browser only with your consent. You also have the option to opt-out of these cookies. But opting out of some of these cookies may have an effect on your browsing experience.
Necessary Always Enabled
Necessary cookies are absolutely essential for the website to function properly. This category only includes cookies that ensures basic functionalities and security features of the website. These cookies do not store any personal information.
Non-necessary
Any cookies that may not be particularly necessary for the website to function and is used specifically to collect user personal data via analytics, ads, other embedded contents are termed as non-necessary cookies. It is mandatory to procure user consent prior to running these cookies on your website.
SAVE & ACCEPT 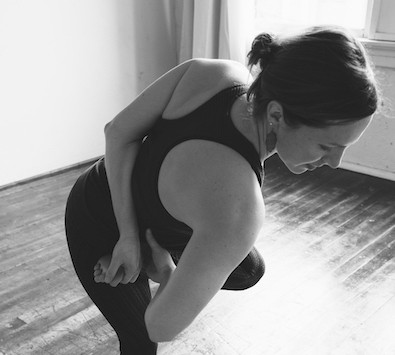 Free 15-minute yoga strength drills video for stronger and smoother transitions between postures - even if you're a beginner.

Thank you! Please check your inbox and confirm your subscription.

Only 2-3 emails/month. No spam ever. Unsubscribe anytime.